I recently put a new fence in my back yard. I had to. We have a new dog named Kaylee Fry Pettway, who is what is sometimes called a “determined jumper.” 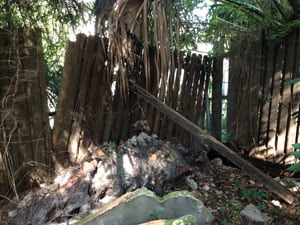 She’s not that big, our Kaylee, yet she is more than tall enough to clear the six-and-a-half foot chain-link fence at the dog park. (That would be the dog park we can no longer go to.) Our backyard fence was six feet tall, in the few places where it was still standing up straight. All along its length I had chained the posts to trees or nearby buildings, or propped it up with poles, bars, and odd items tall enough to wedge underneath it. This was of little help though when Kaylee would yank the rotting boards off of the fence and bring them in the house to us, as if she had just caught our dinner, nailed up to a leaning crossbeam and supported by a rusting metal bookshelf. 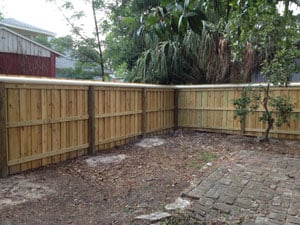 But that’s all gone now. In its place is a fancy new “board-on-board” fence, that little dogs cannot see through, and a clean, almost entirely dirt yard. (Grass is still forthcoming.) However, should Kaylee spot a squirrel in a tree outside our yard, we knew the most expensive six-foot fence would amount to little more than an irritating speed bump to our athletic canine. Then Lena came up with a brilliant plan.

All around the inside-top of our new fence, I installed thin wall 4″ PVC piping. The whole thing was less than a hundred bucks and only took a few hours. In theory, she would be unable to grab the top of the fence and pull herself over, instead slipping off of the broader surface of the pipe, which provided nothing for bitty dog feet to grab hold of.

We had our fingers crossed, but it was still with enormous satisfaction that we later watched our dearest Kaylee Fry attempt, again and again, to jump over the fence. After about her ten or twelfth unsuccessful attempt, she was too bushed to continue. Fantastic! Not only had we defeated her scheme to escape, we had also devised a new exercise activity!

On a whim, I shared my construction with the dog park. They simply stared at me as though I were an idiot. It is ever the burden of genius to remain unappreciated within its own lifetime.

But much like Dr. Frankenstein, I simply say, “Fuck those guys.” I don’t need their approval. Next time they have a squirrel-chasing determined-jumping dog in their park that escapes and the owners come looking to them for answers, they’ll come back to me. And that’s when I’ll let them have the seven foot reanimated monster, made from the sewn-together corpses of traffic violators. Yeah.