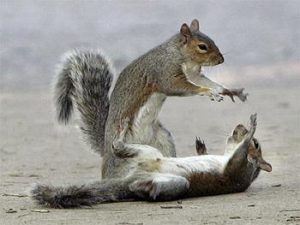 BAM! You are HEALED! Thank you for your generous donation of acorns. The squirrel-god is pleased.

In 2009, Herbert and Catherine Schaible watched their two year old son, Kent, die of pneumonia. While their son had been acting sick for some time, the couple are members of the First Century Gospel Church, which believes all healing comes from god, and going to the doctor’s office represents an act of faithlessness.

The Schaibles went to trial, where they promised never to do it again, and the judge let them go with ten years probation.The terms of the probation were for them to take their other kids (they currently have seven, I’m not sure how many they had then) to the doctor regularly, and to obey the doctor’s advice. They agreed, and left.

Medical experts at the trial testified that even over-the-counter medicines would likely have saved the boy’s life.

Last week the Schaibles’ eight month old son, Brandon, died of an as-yet undiagnosed illness that caused him diarrhea and difficulty breathing. As before, the couple chose prayer instead of medical attention, which, as before, failed to yield results. Today they are facing the prospect of criminal charges in addition to breaking the terms of their parole.

This country allows for the religious freedom of its citizenry, except where that freedom butts up against our common laws. You are allowed to believe that octogenarians can fly, if that’s what your bible tells you, but you aren’t allowed to push them off of buildings. This is the basis for the charges being brought against the Schaibles. But is it right?

If a fully certified doctor of medicine had treated Brandon or Kent, and the kids had died, we would not be gunning for the parents. In their minds, they simply went to a different doctor.

Now if a human doctor had somehow allowed those children to die through improper or negligent treatment, (like, say, doing nothing) we would certainly be justified in seeking his prosecution. Again, no one would blame the parents; unless maybe they kept taking their kids to the same doctor after he’d killed one or two — but that’s just stupidity, not really criminality.

By this yardstick the most anyone should expect is a malpractice suit against god, but I’m not sure that’d fly either, since there is no evidence he ever claimed he’d treat either child.

Which brings me full circle to the Schaibles. Now if you have a sick kid and you just tell everyone you’re taking him to Dr. Shapiro in Bellvue when in fact you never actually leave the house, and Dr. Shapiro has never even met you much less knows your kid is sick, then there may very well be some criminal negligence involved. In order for the Schaibles to escape prison, they should be required to demonstrate evidence that they entered into an arrangement with god for the care of their children, that he agreed, and that he was in some manner improper or negligent. The bible won’t do, as the passages on which the Schaibles’ hang their beliefs about physicians are specifically referring to the quality of doctors in the Bronze Age, and accounts of a few people getting healed by Abraham and Jesus. Neither of those guys were around to tend to Kent or Brandon, and medicine is a pretty different beast today from what it was then.

Just an interesting factoid; from October 1990 to June 1991, there was a measles outbreak in Philadelphia, where the Schaibles live. Of nine hundred thirty eight cases reported to the Philadelphia Health Department, six kids died. The families of all the kids who died attended either the First Century Gospel Church, (the Schaibles’ church) or the neighborhood Faith Tabernacle, which practices the same beliefs with regard to medicine and physicians. Everyone else survived.