In Search of Christmas 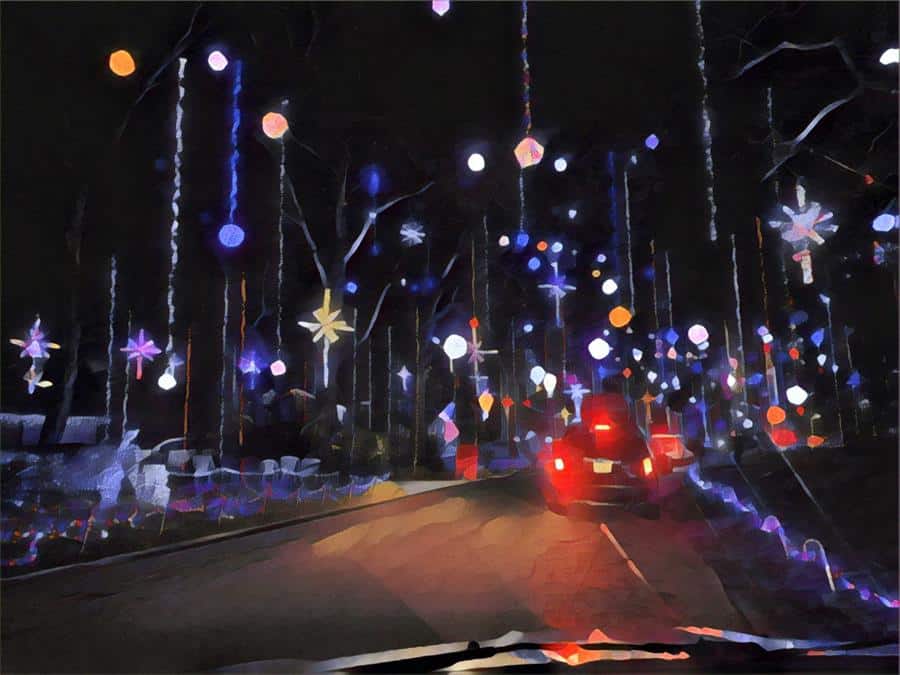 Light-vomit is raining from the sky.

Last month as Christmas was approaching, Lena and I wanted to drive around and go see some lights. (It’s way easier than putting up your own.) The first place we went was a neighborhood on the other side of town that is famous for going all out on the lights, that collectively resembles the town of Camp Verde in Kingdom of the Spiders, my favorite thing that William Shatner ever did—except that instead of a town cocooned in spider silk, it’s more like this neighborhood is buried in giant Christmas-cat, light-monster hairballs. 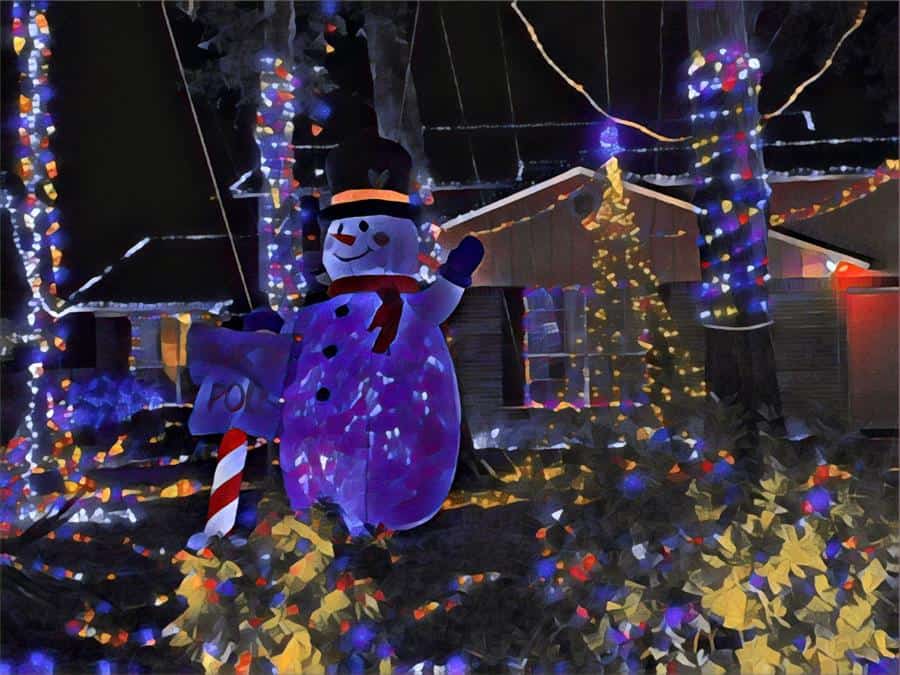 It’s wonderful in a sort of slow-motion train wreck, Christmas disaster and Santa trying to sell you American flags on the way out sort of way.

But we wanted something more. 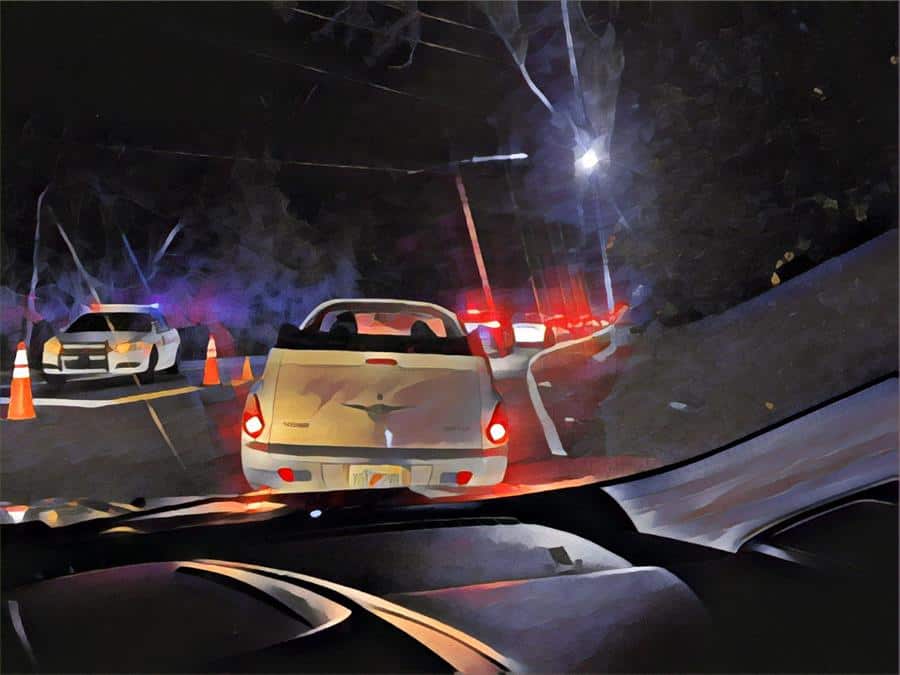 Stretching off into the distance, this line has a whiff of inevitability to it. Of permanence. Like, this is almost certainly what being dead forever will look like.

Next, we traveled the other way across town to the Westside Baptist Church to see their Living Nativity. (Not the Westboro Baptist Church. That’s totally different—I hope.) This is a free drive-through exhibit with scenes from the baby-Jesusy parts of the Bible set up with live actors. The production value of this surprised me in the best way, and I found it fascinating and entertaining in equal measure.

And, because it was both free and drive-through, there was a literal two-mile-long line to get in. But they helpfully handed out a fun brochure at the head of the line to read while you start-stop drove your way to the exhibit. I am positive this caused no one any problems. 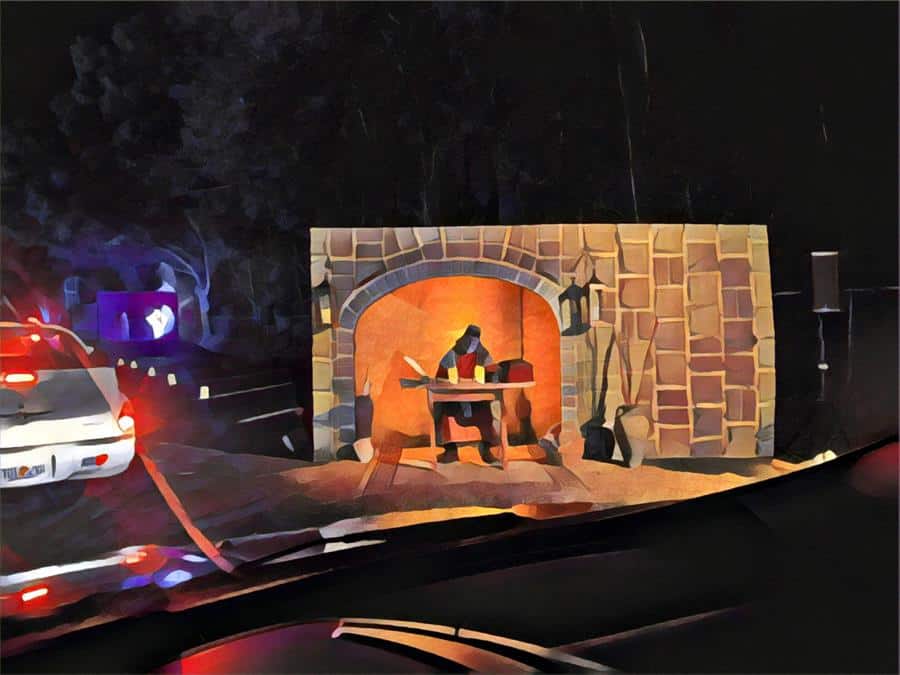 I don’t remember it for sure, but I’m positive someone in the bible must have sat at a desk at some point. Probably writing an account of his adventures in Mordor.

I should take a moment out here to admit that while I am in fact an atheist, Christmas is my jam and I have always found religions and their myths compelling. Christianity is no exception.

The angel on my tree is Tinkerbell. 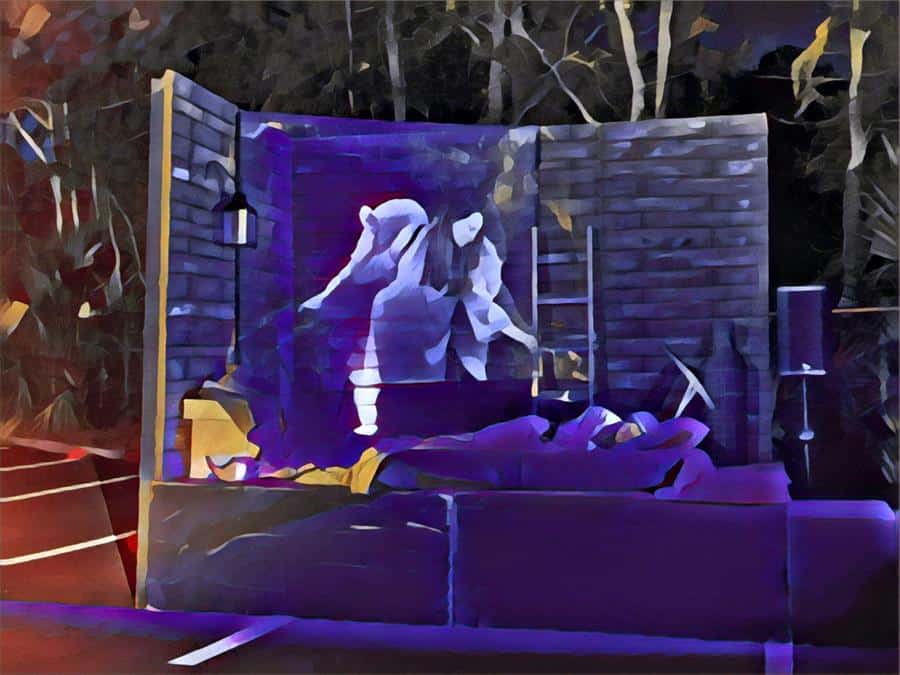 This is the Holy Ghost “visiting” the Virgin Mary the night she suddenly came down with a case of the pregnants. I think this scene cuts away kind of abruptly.

The centerpiece of the show was a four-hundred-foot-long recreation of the Bethlehem market, with hawkers yelling at drivers to buy bread, fish, livestock, and—afterlife insurance, maybe? At the end were a pair dressed suspiciously like the rabbis from Mel Gibson’s The Passion of the Christ. 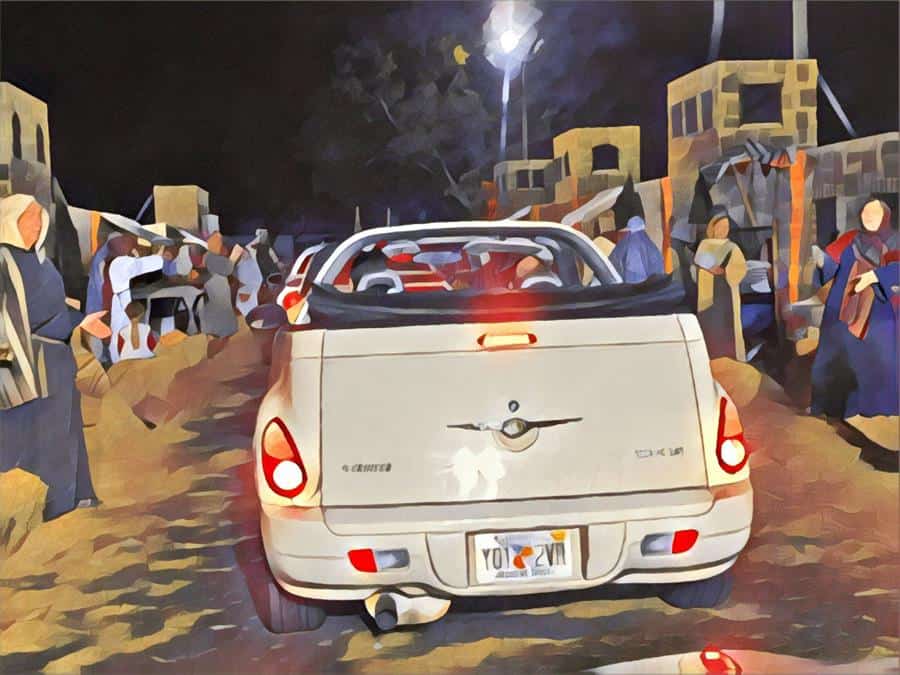 As the car in front of us discovered, you REALLY don’t want to drive through the Bethlehem market at night with the top down.

“Pay your temple tax!” the two ersatz holy men shouted at my grinning face as we slowly crawled by.

“What?” I was a little confused. Everyone else was selling me something for my drachmas. These two just seemed to want the cash.

This really was passion play stuff. Now the Catholic church shut down the passion play all across Europe (except for one tiny German town) precisely because of all this anti-Semitic crap, and even when they relaxed their ban they directed that this non-biblical stuff be left out.

Okay. Two can play at this game.

“What’s a temple tax for?” I stopped my car. No one seemed to mind. Everyone behind me wanted a picture of the guy selling fish.

“For the Jewish god,” answered the first fake-o rabbi.

“For the rabbis to build bigger temples,” shouted the second fake-o rabbi.

“Yes,” the first fake-o rabbi joined in, liking the direction his partner was taking this. “The Jewish god needs your money for his mighty temples.”

“I get it!” I grinned wider and gave them a thumbs-up. “It’s just like a collection plate.”

Without missing a beat, both fake-o rabbis hissed at me and waved their little gold sticks, shouting at me to begone.

I begoned. It seemed easier than explaining to them what the temple tax really was (a half-shekel sacrifice to keep plague away) or that the Jewish, Christian, and Islamic gods were all the same dude. But to be honest, I was impressed by their commitment to the bit. 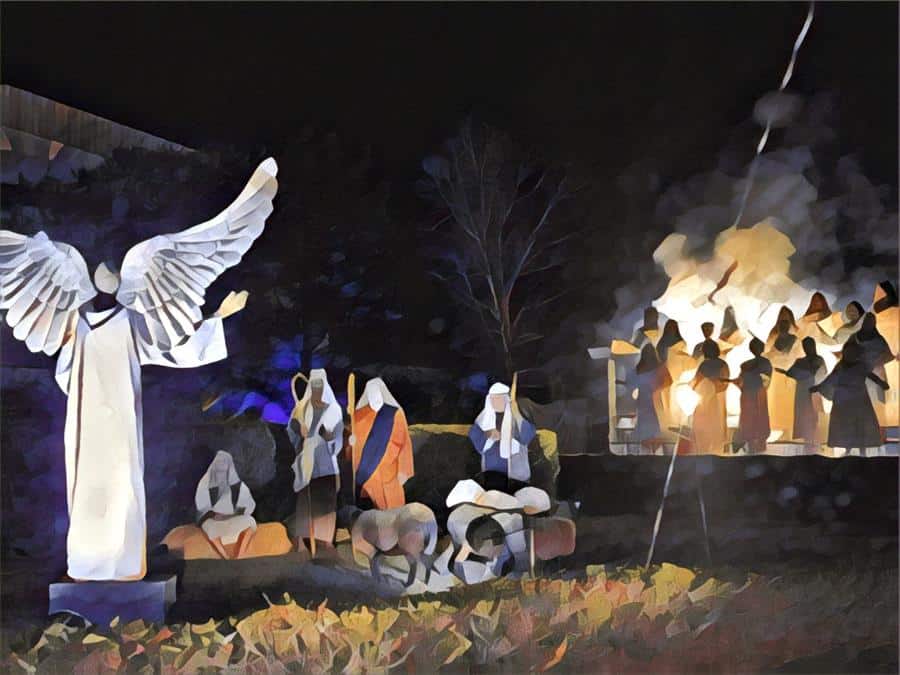 The famous bible concert scene where the angels try and raise money for poor ladies to give birth in expensive hotels with a rock & roll show, but the evil mayor lures the townsfolk away with a charity for puppies instead. It all turned out okay in the end though, since Mary didn’t really have a problem sleeping in goat poop.

In the final sweep, we came across, in rapid succession, the manger scene with the pregnant thirteen-year-old Mary hanging out with the kings and donkeys, a very bored-looking seven-year-old Jesus making his teachers feel stupid, and then BANG!, three crosses on a hill.

But never fear, for while the lord did sacrifice his only son for our sins, it didn’t last long, and the suddenly unsacrificed Jesus was there to wave buh-bye to everyone as they left.

Surprisingly, Jesus had no American flags to sell. 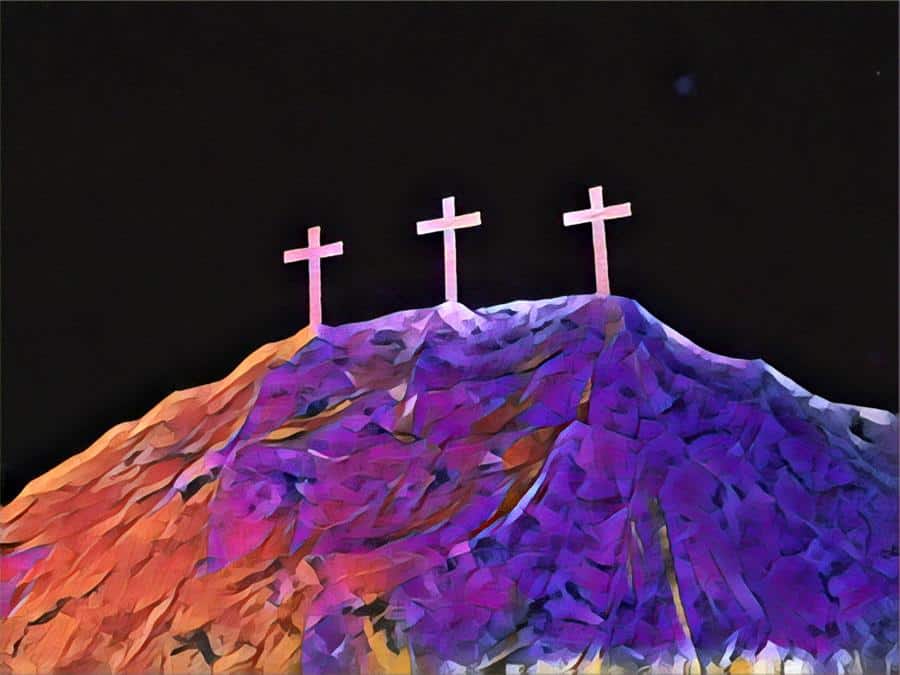 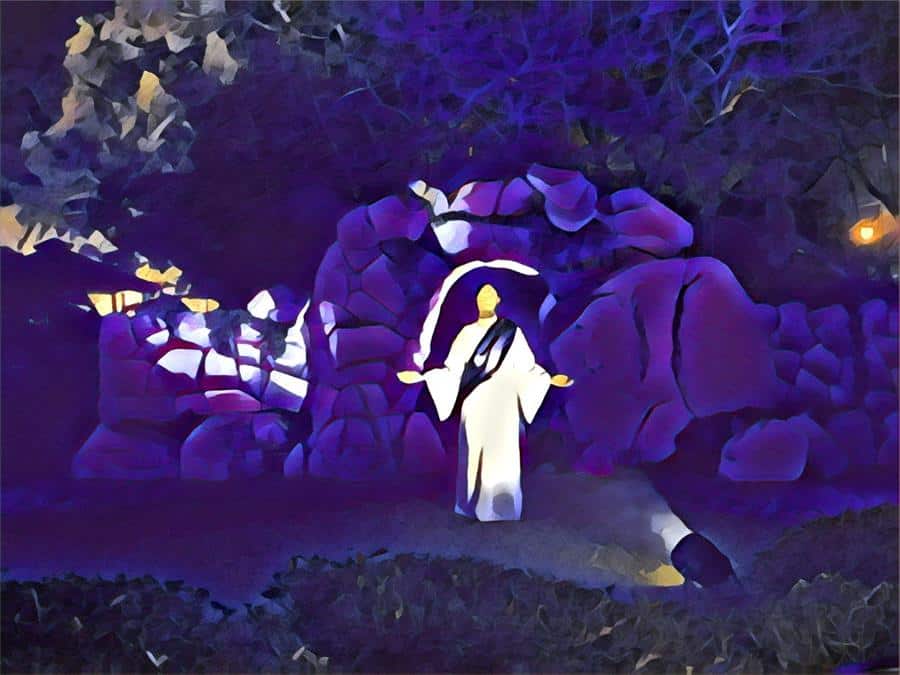 This left us happy and Christmased-up, but there was still one more thing to go see.

I have a sort of colored-light problem. I’m working on it.

Every year the Jacksonville Zoo, which we friggin’ love, puts up a huge light display after all the animals go to bed. There’s holiday music and food, and while there are plenty of people and lots of energy, it isn’t really crowded and we could wear our masks to keep away the plague, having neglected to pay our temple taxes. 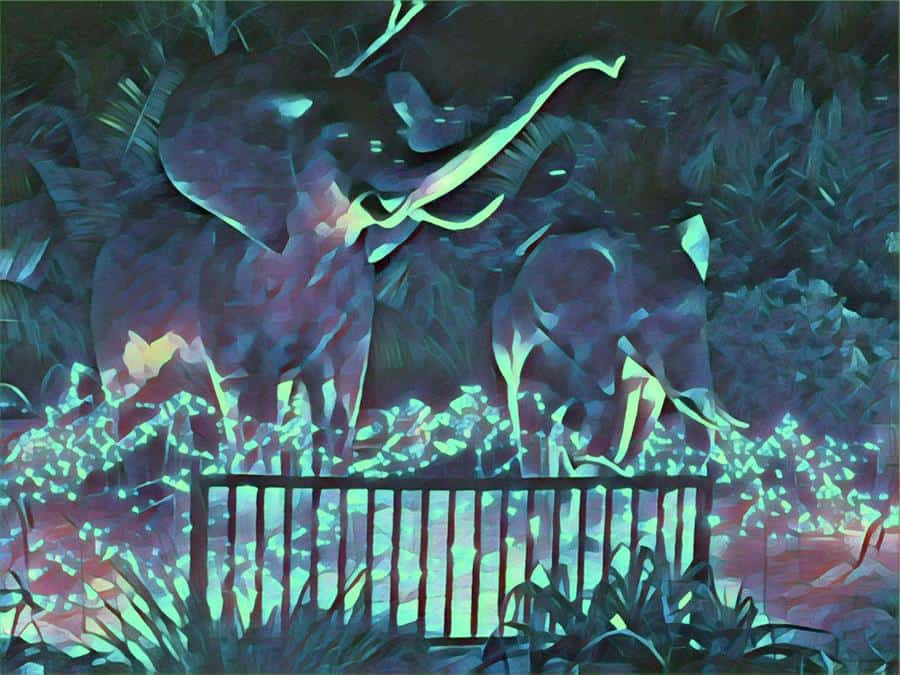 Putting the elephants back in Christmas.

The displays are creative and fun, and they make full use of the excellent landscaping and statuary all over the park. You can wander at your own pace, without anyone honking at you for stopping to harangue the fake-o rabbis, and each area is themed with lights and animals, rather than just being a giant hair-ball of light strings stuck to the sidewalk. 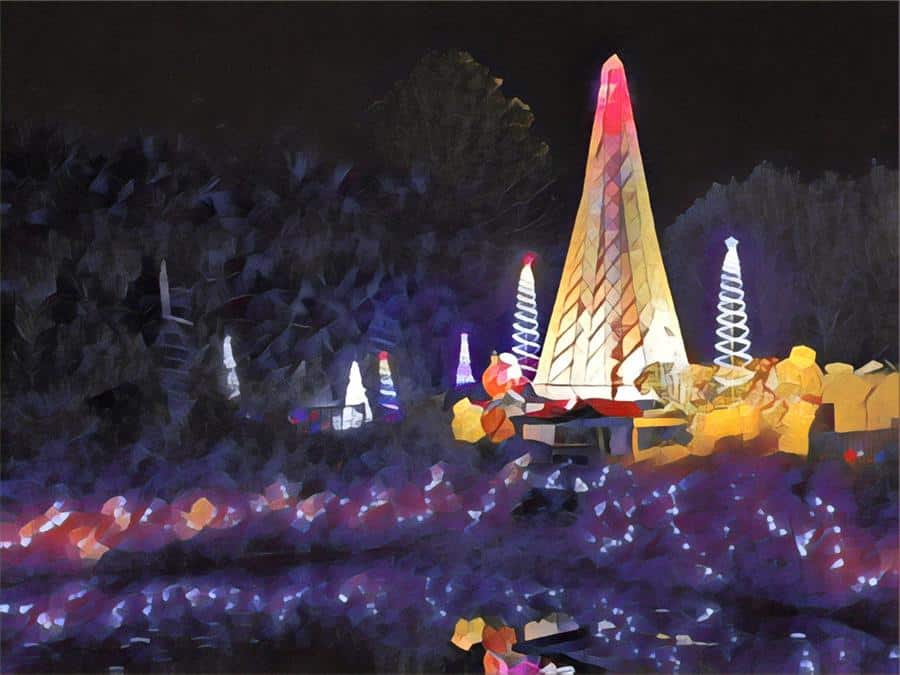 The reason for the season is enormous glowing phalluses pointing at heaven. And also pie.

Going home, Lena and I reflected that we had both, at last, filled our quota of Christmas cheer for the season, at least until it was time to dive into the stockings.

You should see the colored lights Lena gave me for Christmas.