Blow Out the Candle When You Leave 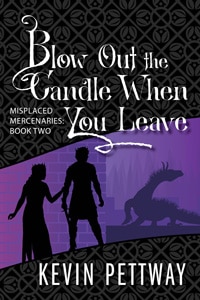 Blow Out the Candle When You Leave By Kevin Pettway

A newly minted king and an untrained sorceress seek allies in a world full of backstabbers. Luckily, these ex-mercenaries know a bit about backstabbing.

“This is my kind of fantasy. Irreverent, let’s call it.” Eric Flint

“Blow Out the Candle When You Leave, the second installment in Kevin Pettway’s raucous Misplaced Mercenaries series, picks up in the immediate aftermath of A Good Running Away. The two main characters, Keane and Sarah, have survived the mercenary war and are busy transforming from the rough and ready street-smart comrades we grew to love in the first book of the series. Keane is now a king, married to the lovely Meg, and Sarah is his head of security, in training to be a sorceress. It’s fascinating to watch the pair deal with the responsibilities that have been thrust upon them: They are no longer on the outside, but must actually take the heavy responsibility of running a country. Pettway’s world of the Thirteen Kingdoms is fully realized, filled with details both amusing and believable, and this series provides the reader with an enjoyable escape from the problems in the real world.” —Jennifer Taylor

“A puckish, free-wheeling take on the sword-and-sorcery genre.”—KIRKUS REVIEWS

Ex-mercenaries Keane and Sarah struggle to keep their heads above water in the roles of snarky pretender-king and sorceress-in-training for the kingdom of Greenshade—which alone would make it a good day. But good days are clearly for better people. As the nations of the Thirteen Kingdoms line up against them, assassins stalk the castle halls with hidden daggers and deadly salted fish. The only weapons Sarah and Keane can count on are each other and the few friends they’ve made, none of whom are safe. While Keane must triumph over the literal enemies at the gate, Sarah must win the support of foreign leaders to their cause. If either fails, Greenshade collapses to the evil empire of Tyrrane. And everyone and everything they care about, including their own skins, will be utterly destroyed. Will our heroes’ efforts to foil enemy plots and pry allies out of the countryside succeed, or stretch them past the breaking point? Find out now.