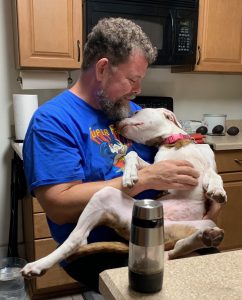 Sooty: I really don't think it is.

Kevin: Did you have a question? I have some manly stuff to do this afternoon. Like, with cars and stuff.

Sooty: That sounds interesting. What kinds of automobiles do you like to work on?

Sooty: I see. Perhaps we'll just stick to the questions we have here, okay? So how long have you been writing?

Kevin: What a weird question. I don't know. It'd have to be five or six hundred miles, if you lined up all the words.

Kevin: That's a total guess though. Probably be less if you couldn't take the highway. Or go around trees. Trees are tall.

Sooty: You include your wife in a lot of your attributions. Care to talk about that?

Kevin: Lena is the best. As any wildly successful writer will tell you, if you want to do this for a living, you need someone at home making actual, spendable, money. Love and adulation is boss, but it don't pay for pedicures and hair-curling, know what I'm sayin'?

Sooty: I'm not sure I do. I have a copy of TIME Magazine right here that was sent to our offices, that lists you as the most highly paid author ever.

Kevin: Yeah, I made that magazine on my printer at home. Wrote it myself, so it may not be what you'd call, super-reliable.

Sooty: Did you send this to us yourself?

Kevin: Sure. Got free airfare and hotel and everything. Your editor's a great guy.

Sooty: So I assume you are not  allergic to telephones and you do not truly have to conduct all interviews in person?

Kevin: How would I know? I've never been interviewed before.

Sooty: Uh-huh. I'm not sure we're learning the kinds of things we're really after here.

Kevin: What are you after?

Sooty: What authors you read, what do you like to put in your books, what are your emotional investments in your characters, what's coming up next, that sort of thing.

Kevin: Those are great questions.

Sooty: Thank you. I don't suppose you'd answer any of them?

Kevin: I've read George R.R. Martin but I liked him better on TV—until the end, anyway, Stephen King is fantastic with characters and tension but occasionally drops the ball with endings. (I'm hoping his son will be better.) I like Patrick Rothfuss pretty well, but he looks so much like me in certain photos (if I had forgotten to shave for two years) that it is seriously disconcerting. Joe Abercrombie makes me laugh, and that's always a good thing. I cut my teeth on The Hobbit, which will always have a very special place in my heart, though I tend to skip past the pages and pages of description in The Lord of the Rings books. My all-time favorite god-writer is Roger Zelazny, who can do no wrong. I can't write like he does, though I occasionally try to sort of write at him, if you take my meaning.

Kevin: Hmph. What the hell kind of name is "Sooty," anyway?

Sooty: You tell me, Mr. McBadass.

Sooty: It's been said that you try to create an emotional touchstone for the reader with each character in your books, even the most vile villains. Why is that?

Kevin: Somebody said that? Somebody read my books?

Sooty: I'm pretty sure it was you. (Holds up the stapled-together "TIME Magazine.")

Kevin: Well it's true. I've tried to write cold, emotionless killers in the past, but they always come off like they're made of cardboard. They don't seem real. The funny thing is, I've met people who really are like that. They're real. They're true — but they don't make for interesting characters. I don't know whether or not they're actually made of cardboard.

Sooty: So you are releasing six books as well as a free short story in your Misplaced Mercenaries series. Any idea what might be coming next? Will you be taking time off for any other projects in between books?

Kevin: If a volcano dumped lava all over your house, would the bricks survive?

Sooty: And this concludes our interview with Kevin Pettway, author of the Misplaced Mercenaries books, and creator of the Heroes of Lesser Earth webcomic.

Kevin: Because bricks are hard, but lava is hot. Like, really hot.