Christmas Cards for the Un-Affronted 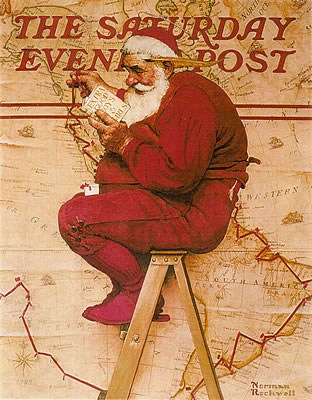 Every year Lena and I create a new Christmas card, and mail it to anyone who wants one. It’s fun, and we get a lot of feedback.

Also, every year, Lena torpedoes a bunch of ideas I have for Christmas cards, on the grounds that they are too offensive to send to our friends, and they will hate us forever. We dance around pitching ideas back and forth, until we come up with something everyone can live with.

Well, maybe not everyone.

In any case, I thought it might be nice to collect the cards from past years here, so everyone could look at them. As well, I thought it’d be cool to include the vetoed cards that actually got as far as a drawing, just for comparison’s sake. I will continue to place future cards here for everyone to enjoy.

Have fun! (Click the images for the full picture, then read the text.) 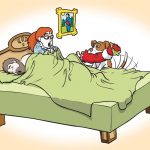 This image is our 2011 card, and is the beginning of our tradition. This was the first Christmas that Kaylee the dog was with us, and since we were picturing ourselves on the front, it only seemed right that we should include the whole family. Kaylee was (and continues to be) an exuberant animal, with a penchant for chewing and utterly destroying anything furry and/or fluffy. The card just sort of suggested itself from there.

No one flamed us for this card, or asked to be removed from the list. It would be the last time this occurred. (For the record, people vastly prefer horrific violence to a little gentle ribbing.) 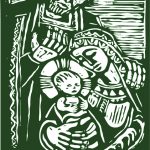 The next card is by far my favorite. (It also took by far the least amount of time to create, though I swear the two facts are unrelated.) While the 2011 card was an original piece of artwork, for this one I stole the image of woodcut from some Google-search, and simply made a few adjustments. (Color, and Joseph’s eyes, in case you are keeping score.)

What I liked the most about 2012 was the subtlety. No violence, no graphic imagery, and no foul language. Plus, it plays with the mythology in a way that only those familiar with it could get the joke. It takes a second to hit, which (in my opinion) makes a funnier gag.

After we sent this card out, we got a call. Did we know that our card implied that Joseph was not the father of our lord and savior Jesus Christ? We did! Well then clearly we also needed to be educated in blah, blah, blah, a bunch of stuff totally unrelated but overtly judgmental concerning our ultimate fate in fiery lake with no explanation as to why that water in that lake was on fire. (The answer is Don’t Ask.) 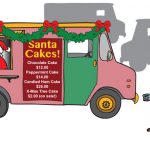 The last card was an attempt to be topical, (food trucks) slightly less offensive, (well, that was one of Lena’s goals, anyway) and, as always, funny. I felt like we hit all the marks… though opinions did differ with our targets.

Most folks seemed to think 2013 was pretty good, if not as snarky and edgy as 2012. I agree. One thing I did like though, was the sense of competition it displayed between the two ends of Christmas, without depicting any actual fighting, which I think is overdone. Many folks took this card as wagging a disapproving finger at the commercialism of modern Christmas, and a cry for a return to traditional, religious values. It made me happy that people could and did read it that way.

Unexpected to me were the people who showed this card to their clergy. it happened several times, and unfailingly got a snicker.

Of course, there were dissenting viewpoints, as in the following letter I received:

“What a waste of your God given talents. I don’t understand why you two want to purposely disgust regular people. This one is worse than the deplorable one you sent last year. It certainly isn’t “funny,” if that was the goal. (The next sentence is removed because it could help identify the sender. We resume…) I feel sorry for you two. PLEASE take me off your mailing list.

P.S. Not to mention a terrible waste of very nice stock it was done on.”

The last line here, about the “waste of stock,” would actually have killed me if I had been drinking a Coke. 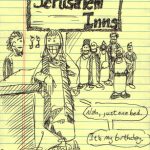 So, to be fair to Lena, I thought I would include one of the cards that did not make the cut. I showed it to my brother and sister, who liked it, but they are similarly-minded to me, and while my sister thought it was a fine card for me to send out, I doubt she would have sent it to her list. (There is no help for my brother.)

Upon reflection, it’s probably a good thing the above-quoted reader did not get this one. I expect I would have received an envelope full of exploded brain matter, skull fragments, and a subpoena.

I’ll post here again next year, so until then, stay frosty!