The Tiny Town of Covidon

Some people have reacted positively to being shut in the homes for months at a time, cleaning, painting, doing yard work, working out, and otherwise improving themselves. Others have taken a different approach to enforced solitude/joblessness, and are trying to sit through an entire episode of All of Netflix on a diet of whatever cheese-powdered corn product is cheapest.

I sympathize. With the second group, that is. The self-improvers can go take a long walk off a short volcano.

As for myself, I am somewhere in the middle—of the Netflix group. I’ve seen Enola Holmes and Vampires vs. the Bronx and the first The Babysitter movie and enjoyed them all. (The Babysitter: Killer Queen was panned online and I don’t want to destroy my movie-picking cred with Lena. Then I’m left with 90-Day Fiance and Coyote Peterson tormenting individual ants into stinging him so he can roll around on the ground and moan for the camera. I do not get that guy.)

I hate the Covid. 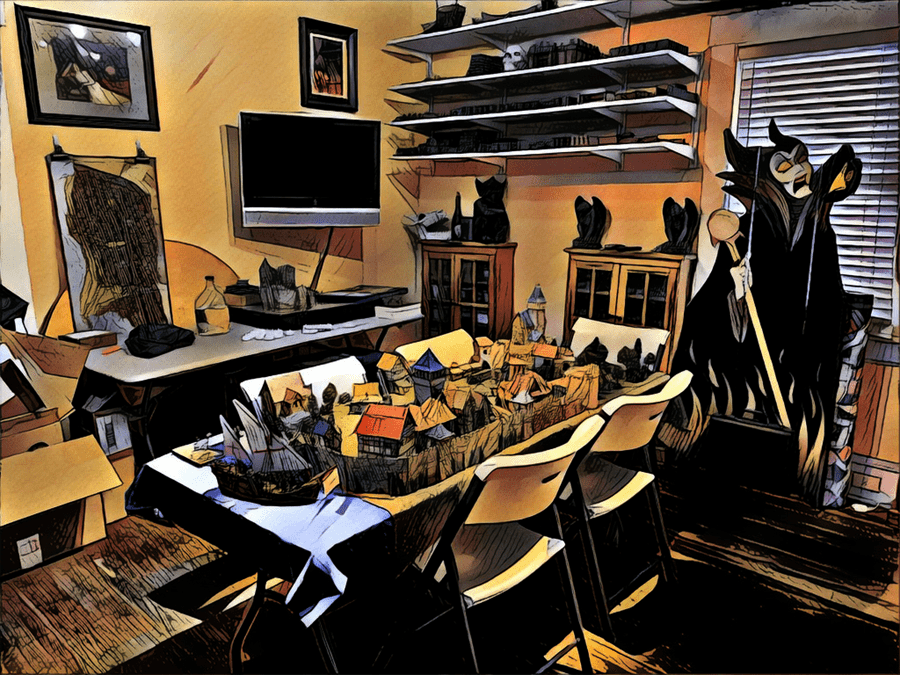 This is my game room. Obviously, my wife loves me more than is healthy for either of us.

So, in honor of my burning need to strike out at a thing that can’t be hit, I have decided to name my little town Covidon, ruled over by King Covid XIX. It’s a crappy little town that has somehow attracted a few adventurers to look over it. That’s a good thing, too, since Covidon has a pirate problem, as well as some marauding hyena guys*. This way, when I start making cartoons about Covidon, I can endlessly eviscerate its citizens in the name of punching back at the disease itself.

I did mention I hated the Covid, right? 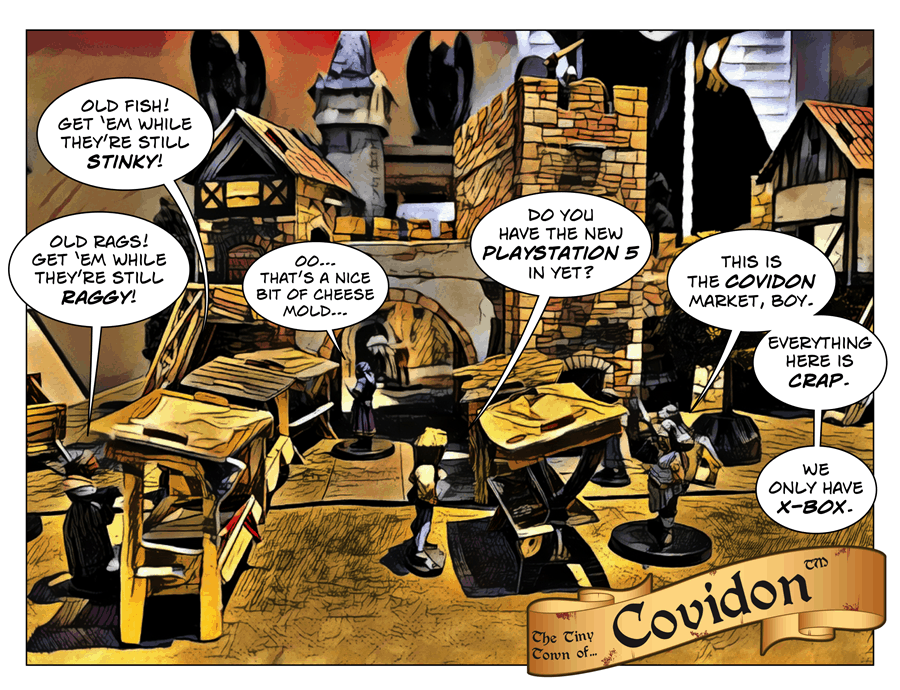 It’s a crap little town. Get it while it’s still crappy!

There will be intrigues, treachery, a brutal, warlord-wannabe king, venal adventurers, selfish carpet cleaners, conniving fishermen, drunken pirates, and a tiny pig. (Because I like little pigs, that’s why.) In short, lots of silly fun, which is exactly what I need.

The chances that we will all be witnessing the real-time mental breakdown of the author are very slim. Almost none. Fifty-fifty at most. Does anyone else hear a squirrel singing We Are the World?

Because I can’t eat corn products due the diabetus, I bought a bag of cheese powder (organic and hormone free, I’m not a savage) to put on my pork rinds while I watch Netflix in between building Covidon. If you see orange smudges on anything where they don’t belong, it’s just the cheese powder, and not my dignity flaking off.

My dignity is mauve. 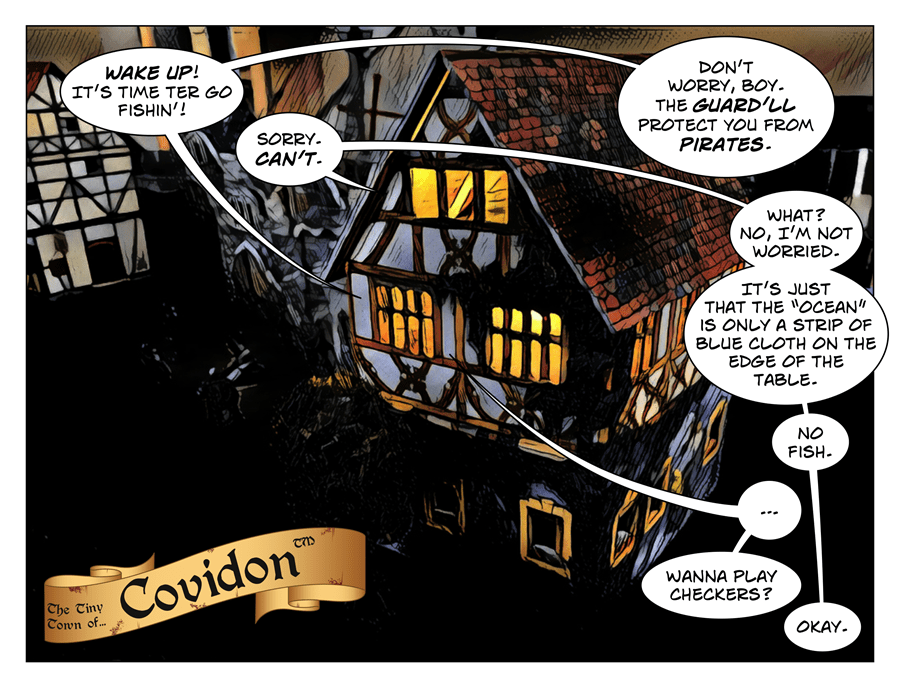 Give a man a fish, and you’ll feed him for a day. Teach a man to fish, and he’ll play checkers with anyone around instead, waiting for you to give him another fish.

*Note: Hyena guys are technically known as gnolls, which, according to Gary Gygax, creator of Dungeons & Dragons, are a hybrid of eight-foot tall, green, rubbery-limbed, and entirely monstrous trolls, and clever, upbeat, gregarious, and three-foot tallgnomes. Now before you get your chocolate in your peanut butter over this, standard English nomenclature puts the male letters before the female in arranging hybrid names—because of course it does. Like a liger being the offspring of a male lion and a female tiger. This means that by the arrangement of the letters, we can see that it was little boy gnomes having sex with giant she-trolls which makes everything all right. Even though all the gnomes were almost certainly eaten afterwards.

From Gnolls, a Recipe Book for Weirdos.

The cartoons of Covidon and its citizens will run on my Facebook Author page for everyone to enjoy. I’m thinking twice a week, but we’ll see. There’s no cost to you, other than you will probably want to buy my books as a way to support the effort since you are such generous and good-looking folks.