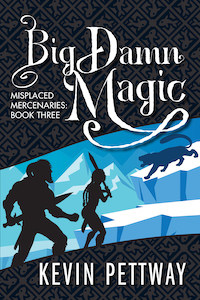 Somehow, Keane, the ex-mercenary king of Greenshade, must outwit a wicked usurper from within and an overwhelming army from without. And if that weren’t enough on his royal plate, when Keane flees with his pregnant queen and brainwashed mother-in-law, his own nefarious past rears up to smack him in the face.

A thousand miles away, Keane’s best friend Sarah, a swordswoman and sorceress-in-training, treks toward the only possible ally strong enough to help them: the goddess of either beauty, seduction, obsessiveness, or insanity.

Depending on who you ask.

Meanwhile, the child of a god commands all the powers of hell in order to grow an empire large enough to swallow the mortal world.

Can Keane and Sarah pull enough allies from an adversarial countryside to take back a kingdom, defend it from an empire, and defeat the greatest threat the world has ever known?

Keane is an accomplished smartass, and Sarah can blow out a candle from across the room.

It should be fine.

“This series has really hit its stride. Every single thing about this book is a treat. Pettway keeps introducing new characters that I fall in love with. Sweet Loffa, the broken-minded slave who slowly heals. The mighty troll Grohann, a solid shoulder for Sara to lean on. High King Ivarr of Coldspine, who, wow. Never mind. I’m not giving that one away. The plot, in this author’s deft hands, is grim and gory and heartbreaking and hilarious.The odds are overwhelming, and there’s no way out, but Keane and his cohorts keep battling on. It’s not a book about the triumph of good over evil, it’s about the deep determination of the human spirit to keep fighting even when the obstacles are insurmountable, and to conduct yourself with honor when all hope is lost. But wait! Never count out the strategic, clever minds of Keane and Megan, nor the fierce love of a deep, loyal friendship. We have surprises, we have new characters, we have lots and lots of hilarious new curses and fantastic humor splattered through the pages like blood off a swinging swordblade, we have some evil, sick, twisted creatures with godlike powers. We have Sara giving one of the best put-down speeches evvah–I had to read it three times. It’s just delicious. I loved it.” —Mary Natwick