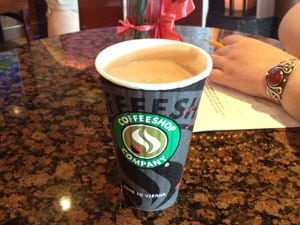 Lena and I just got back from our vacation this summer.

Okay — I am still getting used to saying things like that. This whole “vacation” thing is still pretty new to me. My whole life the word vacation meant taking off a Friday and a Monday because you were throwing a big party and were planning on a two-day hangover. Taking a week and actually going somewhere with it…

In any case, we decided to try and recreate one of the better experiences we had enjoyed, and take a cruise. Many years ago Lena had gotten us a Disney cruise for Christmas. It was an extravagant gift, and one we had both loved. This time, we went with Carnival, for no better reason than the trip was less than a third of what we’d have paid for traveling with Disney.

While I was filling out the paperwork online, I was asked if I wanted to join the “VIP Club.” I remembered a similar thing when I was obtaining reservations from the Downtown Hilton, and it amounted to a free bottle of water in my room, but I figured what the hell. I like water.

Getting to the port, Lena and I bypassed the first big line simply because all of our luggage was carry-on. We were happy about this, but the feeling was tempered by the sight of the very slowly moving ginormous line ahead, that we were told was running from two to three hours. Apparently an unusual number of passengers had all arrived at once.

However, one helpful door-person noticed our shiny new “VIP” luggage tags and whisked us away from the proletariat door and into the carpeted lounge, where we waited for five minutes on comfy sofas with cold water and lemon-aid in silver services. It was an auspicious start.

Unfortunately, it did not last. It was bad luck on Carnival’s part that we had taken the Disney trip first, because even without really wanting to, we found ourselves comparing everything between the two. And in almost every case, Carnival came out the loser.

The exceptions were: our choice of “anytime” dining. This meant that we just waltzed right in and took a seat any time we were hungry, and walked past scores of red-faced and irritated would-be diners waiting for their assigned tables to open up. And second, the tipping. Disney saved everything for the end, gave you some little envelopes with tip cards on them, and you filled them out for each person who had waited on you, which was charged to you later. This was fine, but Carnival included a tip on everything you bought, and then added in extra for service tipping on your final bill. Some might find it irritating, but I thought it was convenient.

Everything on the cruise? I’ll simply say that I agreed with their pricing strategy. They were worth about a third of what Disney charges.

Which is not to say it wasn’t worthwhile. Hell, I’d have paid it just for not having to to cook and clean. (Although the cabin-monkey was really getting on my nerves towards the end. He simply would not stay away.) The ship-board activities were thankfully bland and uninteresting, which left us guilt-free for reading, napping, and playing games with each other. We hit the Atlantis resort in Nassau which has some wonderful aquariums and other neat things to do, and where I recorded about 5 gigs worth of video. (I’m planning a new aquarium of my own. It was research.)

Was the cruise relaxing and (relatively) stress-free? Absolutely. I came back happy and recharged. Was it fun? Well… that’s a little bit more complicated of an answer.

Lena and I always have fun together, no matter where we go. We have similar temperaments and senses of humor, and are able to generally make the best of most situations. But when it comes to “fun,” Carnival is like some freaky kid in the high school lunch room desperate to be liked, who sits down at your table, face straining in a bug-eyed rictus-grin, and yells at you to love him while he punches you in the arm. It’s as if Carnival thinks they can make you have fun simply by shouting the word in your face over and over. Which they do, at every opportunity. Over, and over.

In the end, I’d say that yes, it was fun. But it was fun in the way that a catastrophically bad movie is fun. More MST3K: Manos, Hands of Fate than say, Jiro Dreams of Sushi. I would say that I was happy I went, and I very probably won’t do it again.

And if you should find yourself on board a Carnival cruiser, my only advice is this: The best drink on the ship is the Cruiser, and the worst is the coffee that you actually have to pay for at the coffee shop. It is simply stupefyingly awful.

(At some point in the future, I will likely post a link to the video I am compiling of our cruise. Included will be commentary on the “Multi-Million Dollar Stage Shows,” the hit-or-miss cuisine, the Dangers of Balcony Cabins, and cruising through Tropical Storm Bartender. Uh… Isaac. I meant Isaac.)